BBC Gloucestershire, 8th January 2020
This photographer is walking around the entire coast of Great Britain to fulfil his love of walking and art.

BBC Scotland, 23rd March 2018
Out for the Weekend with Pennie Latin 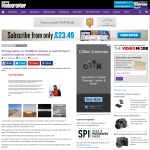 Londonist, July 20, 2015
A man is walking the whole coast of Britain, but to start off he’s done photo essays of St Paul’s to Woolwich, and Woolwich to Dartford.